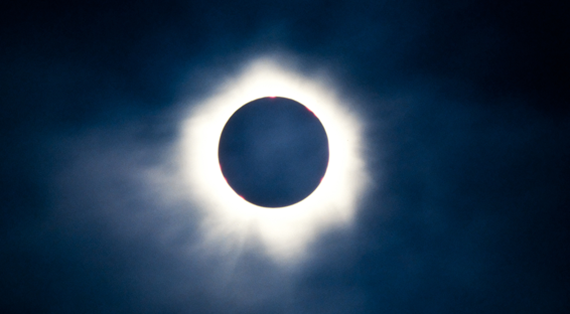 News from our own Symbiosis Team…

The crew is out under the full moon out in the Aussie bush just past the Palmer River Roadhouse. Only 2 weeks until we align again. This time with the TOTAL SOLAR ECLIPSE on November 14th out in the tablelands of Far North Queensland, Australia.

An eclipse of the Sun occurs when the moon passes between the earth and the Sun. The Sun is much larger than the moon it is also much further away, such that the two bodies appear to be about he same size in the sky. During a total solar eclipse, the moon moves in front of the Sun and completely covers it. This casts a shadow on the Earth’s surface. As the moon orbits the Earth and the Earth rotates, the shadow moves across the Earths surface in a narrow path generally from west to east. To see a Total Solar Eclipse you must be in the shadow’s path. If you are outside the shadow’s path at the time of the eclipse, the moon will not completely cover the Sun and you will only see partial eclipse.

People from all over the world are gathering

on this old cattle station and gold mine, sharing stories and skils getting ready for everyone to come and celebrate together. We are excited to share with you what we have been creating over the last months and what we are pulling out of our bag of tricks in the coming weeks.

We hope if any of you are on the fence and can afford to teleport around the world last minute that you would come. So many people from so many countries from around the world. This is truly an international event.

Symbiosis is teaming up with Earth Frequency Festival and Omelette Records to present a stunning broken beat stage, with the best of what the world and Australia have to offer across the genres of dub-step, glitch-hop, future bass, ethno-crunk, breakbeats, IDM and more.

The shadow path of this eclipse starts at sunrise in the Northern Territory east of Darwin. It then travels across the Gulf of Carpentaria and over Cape York. The track across Cape York is about 140km wide and extends from the area around and to the north of Kowanyama on the west coast through to between Bloomfield and Innisfail on the east coast.

The Eclipse Village is a sacred space and intentional village within the festival especially created as a sanctuary for you to expand your consciousness, learn new skills, and to connect with fellow visionaries, yogis, artists, dreamers, and healers from around the world. Featuring a stellar international and local lineup of teachers, futurists, visionaries, artists and elders.

There are things you need to know to prepare for Eclipse2012. From crocodiles, to the extreme heat and humidity there are some very real potential dangers. Please read the entire Eclipse 2012 Survival Guide, download it and share it with your friends.